This is the second post in a series on using ShiftChart.com to gain insight into hockey games.  It is not necessary to read the previous post to make sense of this one, though it may be helpful.

In my first entry, one use of ShiftChart that I highlighted was to get a sense of team depth.  I used the example of the Rangers-Penguins Game 7 from last month (for those living under a rock, SPOILER: the Rangers won), and included the screenshot below.  Context: down by a goal with 10 minutes left in the game, and, hence the season, Penguins’ coach Dan Bylsma reduced his active roster to his top two sets of forwards and defensemen, forcing them to play shift after shift with minimal recovery period.

The chart is still one of my favorites because it captures a coaching strategy change with clarity: no arguments around “the numbers don’t tell the whole the story…” (In fact, there are no numbers here!  A theme I hope to return throughout this series).

A quicker but less detailed way to get a sense of team depth is by looking at total time on ice (TOI) per player.  Click on the Total TOI button in the scoreboard bar and then Sort players by “Total ice time by team”:

The resulting bar chart shows that while Penguins players like Paul Martin (defenseman) and Evgeni Malkin (forward) skated for 28:10 and 23:04, respectively, there were players like Craig Adams and Tanner Glass who logged less than 7 minutes.

The difference in player deployment between the two teams is visually apparent: the Penguins’ distribution of ice times is highly skewed, while the distribution for the Rangers is only moderately so.  The Rangers have been a surprise playoff success, led by stellar goaltending in Henrik Lundqvist and depth—four forward lines that coach Alain Vigneault feels comfortable using for almost the entirety of games.

These charts are, of course, for a single game, and better capture how a coach views his players rather than the players’ “true” abilities (former Rangers’ coach John Tortorella benched Brad Richards last playoffs, for example).  One could make the reasonable argument that we should really look at deployment over a season to get a truer sense of depth. I don’t disagree. However, I do believe that playoff games, particularly elimination games, are especially revealing on how a coach views his team and deserves special attention in any discussion about team depth.  For the purpose of the remainder of this post, I’ll continue to use the term from the perspective of “a coach’s willingness to use his full roster of players”, which I understand some may find unsatisfactory.

Below is a 30-second video of how to create the above chart:

The video may seem overkill (it is) but it serves another purpose in illustrating one of our guiding principles in designing the visualizations for ShiftChart: make the data believable. That is, don’t make the consumer wonder, and, even worse, doubt, how the numbers got there.  If one can accept that our shift chart has accurately transcribed official NHL shift data into those colored bricks, then seeing those bricks stacked up should require minimal leap of faith.

Depth of other playoff teams

Let’s take a look at the total TOI charts from a few other game 7s this playoffs to see what we might learn about those teams’ depth.  By April of this year, it had become cliche to say the Boston Bruins were “built for the playoffs”; Scott Burnside of ESPN even described them as a “playoff fortress“.  And yet, one month later, the Bruins found themselves trailing the Montreal Canadiens by one goal in the 3rd period of a game 7 and ultimately failed to get a puck by gold medalist Carey Price.  The finger pointing in Boston has been measured compared to the outcry in Pittsburgh, but a glance at total TOI reveals a 4th line that coach Claude Julien simply could not use for offensive upside and will likely remain the focus for tweaks in the off season. 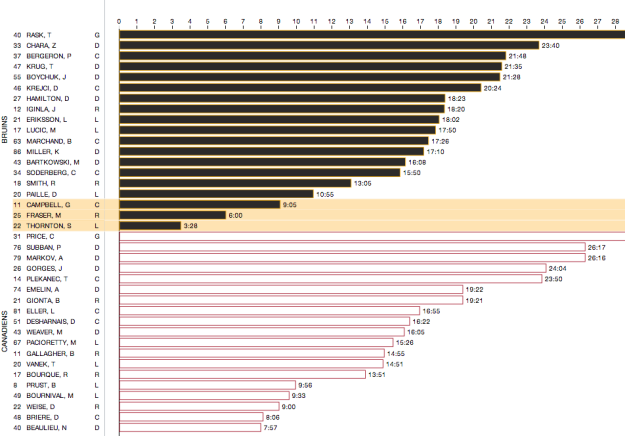 The Chicago Blackhawks fell to the LA Kings in a game 7 overtime.  Like the Bruins, the Blackhawks will try to keep their major pieces, but the scrutiny is deserved for the bottom three forwards, two of whom played less than 4 minutes each!  Duncan Keith’s 32+ minutes for a game that ended five minutes into overtime may raise an eyebrow, but I believe Nick Leddy (12:37 TOI) has demonstrated continuous improvement this season and will only log more minutes next season—Leddy played less than 4 minutes in last year’s Cup winning game 6. 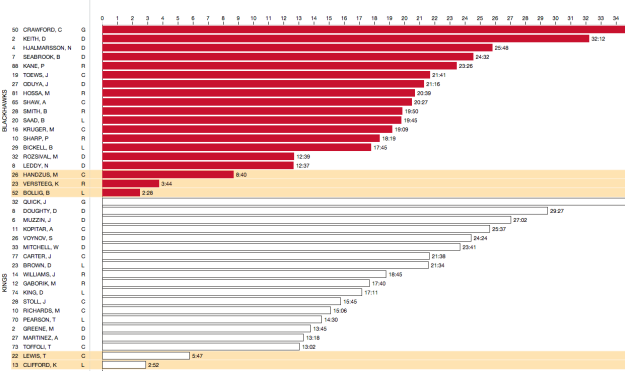 The two teams that demonstrated depth most consistently have earned their ways into the Stanley Cup finals.  The TOI charts for each team from Game 1 look remarkably similar.  One noteworthy difference is the 31:12 played by Rangers’ star defenseman, Ryan McDonagh, while their 6th defenseman, Raphael Diaz, skated only 10:15.  By comparison, Kings’ lowest TOI defenseman, Matt Greene, logged 16:48, indicating the Kings may have an edge on the blue line (beyond the phenom that is Drew Doughty). 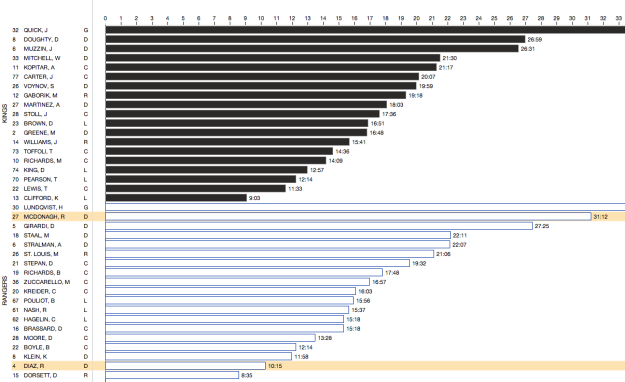 A look at the shift chart below reveals that Rangers’ coach Vigneault used Diaz only twice in the 3rd period, both times within the first six minutes before keeping him out of sight in the crucial stretch of the period.  John Moore, finished with his two-game suspension, is expected to play in Game 2 in place of Diaz.

Rangers vs. Kings Game 1. Rangers’ Raphael Diaz only had two shifts in the 3rd period of a tied game.

One last note about McDonagh in these playoffs and the shortcoming of charts alone: he covers a tremendous amount of ice, sometimes battling in the offensive zone corners only to then have to sprint back on the backcheck.  This style is in contrast to Ryan Suter of the Minnesota Wild, another heavy-minute defenseman who plays a more efficient game and thereby avoids the foot race scenarios.  The data to quantify the intensity of shifts is not available (yet), but it is something to be mindful of when looking at these charts.

The Kings won another overtime thriller, this time in 2OT.

John Moore returned as expected to the Rangers lineup for Game 2 as the #5 defenseman, with partner Kevin Klein sliding down to #6 (Klein was not used as frequently in special teams, especially in 3rd & OT).  This limited McDonagh’s minutes to 37:48(!), a number I wilt just thinking about, and yet was still behind Doughty’s 41:41.

The TOI chart reveals remarkable balance in usage of both rosters, with the Rangers ice time more evenly spread.  This is expected since the Rangers led for most of the game (two 2-goal leads blown) and the Kings were in catchup (aka “Seabiscuit”) mode, leaning on their top players more heavily.  If anything, it is remarkable that the Kings’ chart is not more skewed; it is a testament to coach Sutter’s confidence in his players that he uses them all, even when trailing in the 3rd period.

As I study the shift charts and TOI charts, I often end up with more questions than answers.  What metrics can we construct to measure depth?  How might it depend on score in the game?  How can we better visually compare depth of the two teams?  Across a season? To me, this is one of the most important aspects of visualizing data: seeds for new questions emerge that one had not previously considered.